What are sales Velocity metrics and how is the new business Prediction calculated?

Explanation of how the 90-day sales Velocity Metrics are used to calculate the new business Prediction.

What are Velocity Metrics

Sales Velocity Metrics are a measure of how quickly your business is winning new deals. A higher sales velocity means you’re bringing in more revenue in less time. The quicker you can grow your pipeline and convert prospects into paying customers, the more successful your business will be.

The five key measures of sales velocity are:

How are they linked to the Forecast

The Velocity Metrics for the previous 90 days are automatically used to calculate a new business Prediction in the Forecast - as represented by the values in purple below.

What if the metrics don't look right

If users have recently uploaded lots of data to their CRM or are aware of missing data or recent anomalies, this can cause the metrics and Prediction results to become skewed. If this occurs users can Override particular metric inputs to create alternative Prediction scenarios on-the-fly. 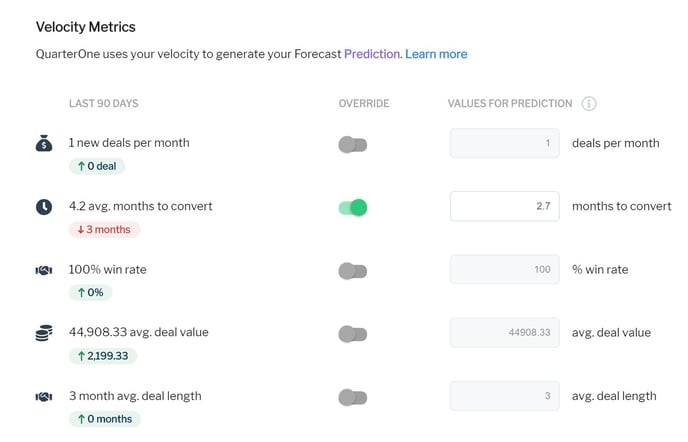